Ordered the silver slash curtain for the finale today…….. plus finished working out at what point in the show the Chorus girls will wear wigs, have their hair down, or wear hats – all important stuff!

A few more press releases went out today too……

It’s all go on the panto front!

Traffic meant many people were late arriving for rehearsal – but we did manage to get a lot done today all the same!

Stephen Ayres choreographed London is London, We Sail the Ocean Blue, and Miracle – and all are starting to look good. With all the dance numbers now, it’s just practise. I only wish I could remember the dance moves myself!!!

I was delighted Tina was able to spend most of today’s rehearsal with us – she really adds so very much when she is able to be there – direction, aiding with choreography, generally helping ‘style’ the show! Thanks Tina!!!

We were joined by Billy Blood Drop for a photo session which was great!

Spoke with our Musical Director, Daniel Dibdin today. He’s currently MD for the Towngate Basildon’s Snow White, which finishes on 6th Jan. So, Daniel will be finishing one panto and starting another – with us! He tells me Sean Randle will be back with us on Drums again this year (which is really good news) – so we know we’ve got Daniel plus Sean and we have Mark Drapeau joining us on percussion. A great start for what will be a great panto band! 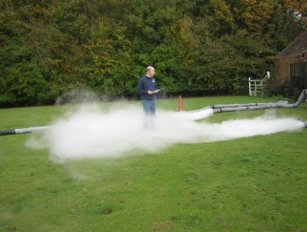 Choreography this year is in the hands of Stephen Ayres. Stephen runs the Foot-Light Dance School and has kindly given up time to help us with the panto. He is choreographing many of the numbers in the show – and those that he isn’t I am choreographing myself (with my limited skill and ability!). It’s good to have someone of Stephen’s talents involved. The two tap dance nunbers he has done are brilliant!

We’re delighted that we’ll have Nigel Taylor and Mike Bullen, along with Ray Chamberlain, on Stage Crew this year – our hard working crew always ensure the sets look just right, and have the unenviable task of keeping out of the way while others are in the limelight, yet doing the hardest work in scene changes!

After a break of must be well over 10 years, Robin Rhind is back to do our special effects! Robin is a great mate and is invaluable as his experience in terms of pyros, dry ice, and electronic effects is immense. He can always work out just how to achieve whatever effect is required. Robin, I’m delighted you’re able to work with us again!

Martin Broadfoot and Colin Prior will be back in charge of Sound for us again – they travel far to do the show (Martin from Cornwall (!) and Colin from Surrey) – and both are very experienced so know exactly how to get the ‘right sound’ for panto. Thanks for doing it again guys!

Andre Garnett is our Lighting Director and he’s already been along to many rehearsals so he can see how the show is working, and get the right feel for the show in terms of lighting. Andrew has also skillfully built our boat, the ‘Saucy Sal’, which this year will be sailing on a sea of dry ice during Act Two – can’t wait!

The fantastic Daniel Dibdin is back as Musical Director and he will be getting his panto band together soon. We don’t see them until the week before the show, but Daniel’s arrangements are always excellent. Daniel is a brilliant MD and we are thrilled to have him work with us again.

We won’t see our Front of House team until show week, but Angie Casey, Jacqui Bailie, Jill Cook, Grinda Willis, Zena Kirk, Steve Keogh, and Sandra and Terry Phillimore will be working hard to ensure the audience are ticketed, seated, programmed (not in that sense!), souvenired (is that a word?!), etc! They, like so many others involved in the panto, work incredibly hard but get none of the applause…… so, thank you all!

I must say a special word for Gill Vymeris, who spends rehearsals sewing, fitting and making costumes – she’s here to chaperone and along with Hilary Whicker notes the Children’s and Middle Chorus’ moves in their master script, but Gill has been a fantastic help with costumes this year. Katie Coxon is also great, she knows the theatre and the area, she’s got us contacts for publicity, helped us with rehearsal space, etc.

And then there’s our brilliant Graphic Designer Steve Rider. Steve has done our posters for 25 years – we are old school pals, and his unbelievable talent for design is shown on our posters and flyers. Steve moved to Boston (USA) a couple of years ago, where he now lives with his lovely wife Karen, but we are delighted that Steve is still happy to do our poster design – it really lifts the whole show to have such a great poster – thanks Steve!

Finally, thank you to all the parents who ferry our Children, Middle Chorus (and some others) to and from rehearsals – we couldn’t do it without you!

Pulled my silver finale shoes out of storage today – they needed a respray, but that’s done now, and they still fit – just! They’re a pair of old slip-on work shoes which I sprayed silver and had a glittery thing sewed onto each many years ago. They look great from a distance, and I’m glad they still fit. I only have to wear them in the show for a few minutes, so pinching a bit can be accepted!

Went to see Zoe (our Fairy) in Aladdin Jr at the theatre last night – she was excellent. A good production, I really enjoyed it. Nice to see theatre in use (this was the first show I’ve seen at our venue!).

Martin Broadfoot rang and we chatted through the mic requirements for the show – we think all will be OK. Now we just need some more people! At the time of writing we could do with 2 follow spot operators, at least 2 more on stage crew……. hey ho!

After yesterday’s rehearsal I am aching in places I’d forgotten I had!! We got through two new dance routines with me choreographing (!), plus we revisited most of the other dances in the show with the principals, the choruses and the children. We had Theo and Ray with us, so we ran the Sultan’s palace scene and then went through the whole of Act Two. Even with a couple of people missing, it was a good rehearsal, and we only have four more rehearsaals now before we’re into the theatre – gulp!

It’s been a busy year. I’ve been busy. Busy at home, busy at work. How I found the time to write the panto script, Cinderella alone knows (maybe I had the help of a Fairy Godmother?). But it was written, and I’m delighted that we’re at the Eric Morecambe Theatre in Harpenden Public Halls – a fantastic venue. I know it’s going to be great for us!

Mandy Fleming is back as the villain, the evil Queen rat – she is a fabulous villain, and will really get the audience going. A great company member and it’s really good to have Mandy on board again.

Zoe Coxon is our Fairy of the Bells. Zoe is new to Act One but no stranger to the Harpenden stage. Between now and panto, she’s doing at least 3 other shows – Zoe is a hard working girl! She’s proving to be delightful at panto rehearsals, and captures the Fairy part perfectly. An extra bonus is Katie, Zoe’s mum, who is an absolute star and very helpful – thank you Katie!

Tamsin Goodwin-Connelly is playing Dick. She is a very strong actress and singer, and we’re delighted she agreed to do the show with us. A really talented company member.

Joanna Vymeris is Tommy the cat and Joanna’s worked with us before – she spends a lot of rehearsals sitting around waiting to be called, but when she does get to do her bits, she is fantastic – miaow! Joanna’s mum Gill is spending all her time sewing costumes – and they’re looking great – so thank you Gill!

The reliable, competent stalwart Andrew Willis is Alderman Fitzwarren as well as Stage Managing the show. Andrew is a reliable backbone. We’ve worked together for many years and he knows exactly how the show works and delivers at rehearsals every time. A great member of the group.

Sarah Geraghty joins us as Alice Fitzwarren – and she is a delight. Just what you want from a principal girl – pretty, a beautiful speaking voice as well as a lovely singing voice, and a good actress.

The one and only Dave Moore is back as the panto dame, Sarah the Cook. Dave is proving to be invaluable in panto – he’s funny, learns his lines quickly (!), and gets involved in everything. A true company professional!

Theo Theobald joins us as the Sultan. Theo has a tremendous amount of experience in comedy and performing, and his contribution to the show is already proving to be hilarious as well as 100% professional. Let’s just hope we can sort his turban out before the show!

Ray Chamberlain as the Vizier has his first rehearsal with us on Sunday. He’ll be great, I know it!

And then we have our lovely chorus girls – Jo Almond, Jai Farris, Kaytie Johnson, Freya Page and Grace Kelly Rafton. They’re all talented dancers, look fantastic – and are starting to really get involved in the show.

Ourr ‘middle chorus’ comprises Kate Alexander, Louise Phillimore, Sophie Phillimore and Anna Wirszycz – all of whom have worked with us as children in the past. It’s great to have them back, and we’re delighted they’re prepared to make the journey from West London to do panto (and their parents). Thanks for coming!

So, that’s the cast.

Then there’s the rest of the company, none of whom we could do the show without – more next post!

So …. we’ve got a panto blog now! I must write something!